How to Change Behavior And GET THINGS DONE

Humans do things for a reason. You can’t improve a person’s health until you change their behavior. This includes your clients, your coaches and yourself. Here’s how to do it. A clear picture of success. Every business client starts with the “Perfect Day” exercise; every client in our gym starts with “Bright Spots.” It’s our way of asking, “What do you really WANT?” The 20% bonus. I write about “head starts” in Two-Brian Business and Help First. It’s important to show people they’re already a little bit successful. Bright Spots. Motivation requires on success, not the other way around. Highlight wins early. Celebrate them. In the Ignite 101 course, Ty calls this “chunking.” Podiums. I teach “podiums” as a marketing concept in the 321GoAcademy, but it’s far more. A podium is a victory over a previous best. It’s also a chance to step up and move to a higher degree of challenge. First podiums will seem small. Maybe you finally write a blog post, or a client rows 1000m for the first time. But it provides a base to stand on and achieve a new perspective.

Why I Study Behavior

I will never be the cheapest gym in town. I will not spend $100,000 on equipment every year. I will not provide 24-hour keycard access. I will not provide towels, or run a juice bar. I sell coaching. Coaching is more than teaching, more than cheerleading, more than dictating. I don’t merely provide access to equipment, but deliver people from their current state to their goals. Reaching their goals requires hard work. But before hard work comes motivation, and before motivation comes behavioral change. I can’t out-yell a bad lifestyle. No goal is motivational enough to pull a client past every temptation, every late-night craving, every moment of weakness. None. The knowledge “this is bad for me” won’t overcome “I want this right now” without practice. The driver only thinks he’s controlling the elephant. I’d rather be an elephant trainer. People do things for a reason. That reason is rarely logical. Most even know what they “should” do. My job is to make them want to do it for the rest of their lives.

What IS Perfect Form?

In “Supertraining,” Mel Siff makes a case for “imperfect training”: occasionally varying the balance of loads, stances, speed and others to better prepare an athlete for sport. Older coaches will remember Paul Chek’s “balance” training for the “core” in the early 2000s. For years, parents visiting my gym would cite the value of “training the little muscles in the core” while talking about their kids. Heck, “core” is STILL a buzzword in training circles of lower educational average. Obviously, the nature of sport is unpredictable. But can the training room best prepare an athlete for that unpredictability? Is the scope of unpredictability different for each sport, and therefore trainable only on the field or rink? “Imperfect training,” in my mind, can be spread across a broad spectrum: – inherently unsafe, with little value (risk > reward) – inherently unsafe, with moderate-to-high value (risk = reward) – inherently safe, with moderate-to-high value (reward > risk) – inherently safe, with little value (risk + reward = 0.) It’s irrelevant to our purposes to discuss activities which create no reward. But all training carries an element of risk. Small “injuries” – including muscle tearing, elevated blood pressure, glycogen depletion and exhaustion – are necessary to spur super compensation. In that light, where is the line between “small injuries created on purpose” and “small injuries that are a side effect”? What about small injuries that cause no real limitation or long-term damage, like blisters? “Imperfect” training raises the risk associated in training. BOSU balls were popular toys (but not with Siff, nor with me) for years. The unstable surface of a BOSU ball was argued to create more stability around the ankle and knee joints. Higher risk for a reward or arguable value. Where do box jumps fit into the risk/reward picture? Low-rep box jumps done from on high? High-rep box jumps done from a medium height? Where is the “safe” line in either scenario? … 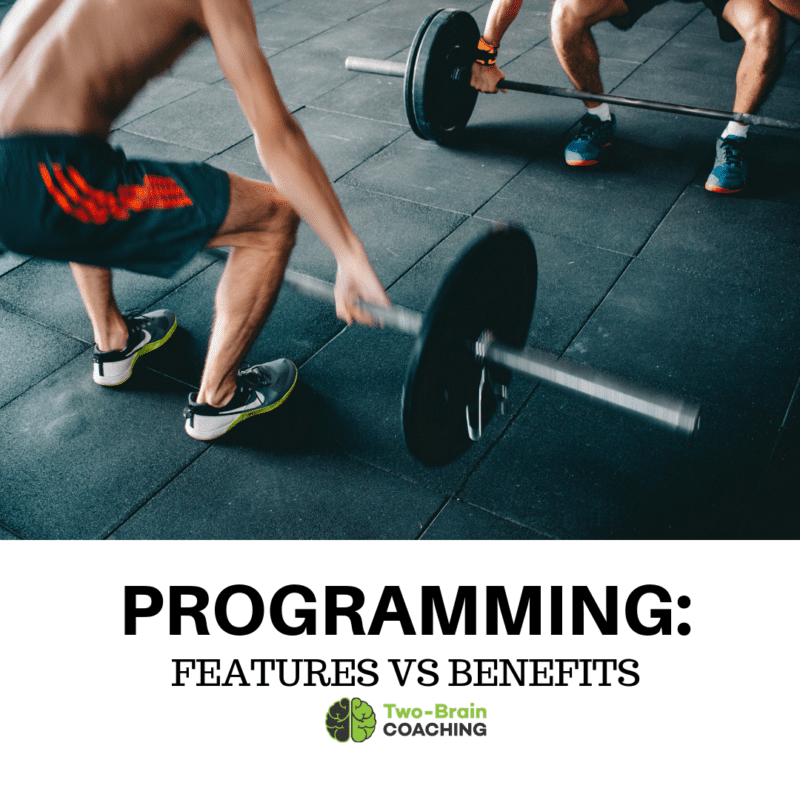 This is an excerpt from Two-Brain Business 2.0.  Early in 2015, I was at a seminar for coaches. One attendee bragged up his box, his coaching and his programming: “I have everything,” he said. “All the toys. We can do anything that pops up at Regionals or the Games. I reinvest every dollar of profit into equipment. We’re the only box in the state with The Pig, I think.”   His programming went like this:   “I wrote down a list of every exercise in the L1 handbook, and I make sure we do every one at least once per month. That way I’m following the true ‘constantly-varied’ model.”   Many coaches believe the same.   But that’s not true. A real training model focuses on benefits, not features. Here’s the difference:   Benefits-based programming for a cop, ski racer and world-class BJJ competitor: “Our goal today is to spend 4-7 minutes in an anaerobic state. This will benefit you, Greg, because after you chase down the bad guy you’ll need enough energy to fight him. It will help you, Eva, by preparing you for all-out effort on a Super-G. And it will help you, Mike, by keeping you in a high-lactate state for the same duration as your typical match. We’ll put you into this anaerobic state with burpee box jumps: you’ll hold your breath for a half-second on each jump, spiking your heart rate and requiring a complex motor tasks while in severe oxygen debt.”   Features-based programming for the same trio: “We’re going to use the new monkey bars today, and then pull the sleds. We haven’t done that in awhile! And then it’s time for a Fran retest! This is gonna be spicy…let’s go!”   The latter sounds like a LOT of fun. And it’s an exaggeration: I could make the case for including monkey bars, sleds and Fran for cops, ski racers and BJJ athletes. But …

This was originally published on Dontbuyads.com on May 5, 2010. Coaches differ in personality, but that doesn’t mean that one style is better than another.  Different styles attract (and keep) different clients. Consider two styles of animal control, the Cowboy and the Shepherd: The Cowboy: Guides the animals by herding from the rear, or the middle, of the group Is loud Slaps leather fearlessly Throws himself in the way of the charging animal Prefers confrontation to provoke immediate action Uses the tools available, including voice, but also whip and heel; ‘Breaks’ animals, and then builds them back up better Uses a one-on-one approach most often The Shepherd: Changes a stubborn animal’s direction a little at a time, not head-on Leads from the front, usually with bait, or a promise Avoids direct confrontation, because blocking a sheep from grain will only create more desire Creates safety in numbers ‘Teaches’ the animals with the carrot instead of the stick Uses the group dynamic most often Both: Love the animals Can coexist in the same barnyard Use the same tools (hay, water, grain) Of note: though the ‘cowboy’ figure is more romanticized,  it’s no coincidence that the largest grassroots-driven movement of all time refers to its Messiah as “The Good Shepherd.”  If people can relate to you as one of them, part of The Resistance, a leader in name and action, they’re more likely to follow.  It’s sometimes easier to convince the flock to move in a single direction than one single wild stallion.  So says me, but hey – I come from generations of shepherds.

The Coach's Toolbox: A Thesaurus

When I was a kid, I loved hearing the “Happy Birthday” song. Especially on MY birthday. The song always came right before the exciting part of the party: the cake and presents. As I aged, the song lost its magic because I became attenuated to it. Hearing “Happy Birthday” several times every year–hundreds of times over my lifetime–had a desensitizing effect. It no longer makes me excited. Imagine if I heard it every day? Coaches fall into ruts with their cues and encouragement. It’s easy to give the same cheers and cues to every client or class, because our brain likes to slip into automatic mode. But this is problematic because: Not every cue works for everyone No cue works well in every situation Every cue loses its effect over time Some cues have more power at different points in the workout (watch the video on Logical and Emotional Cues here.) In “Managing the Training of Weightlifters,” Laputin and Oleshko included Soviet studies on music and performance. The scientists controlling the studies were seeking optimal arousal states through the use of music (or silence, or motivational speeches) during training. Spoiler alert: military marches were best for Cold War-era lifters. But the scientists ALSO found that frequent exposure to the SAME song led to desensitization: the song no longer had the same effect after frequent exposure. Think of your friends who compete in powerlifting: do they have a “go-to” song for the deadlift platform? Mine do. That song changes frequently. At least one world record holder blogged about music she “saved” for meets (in her case, Metallica’s “Black” album.) She didn’t listen to the same music in training; she saved it and harnessed its effect. Your clients are bored with your cues. “Great job, Harry!” loses its effect after the first month. Coaches should seek new ways to cue movement and offer encouragement. It’s thought-provoking (literally) for both athlete and coach. Why do …