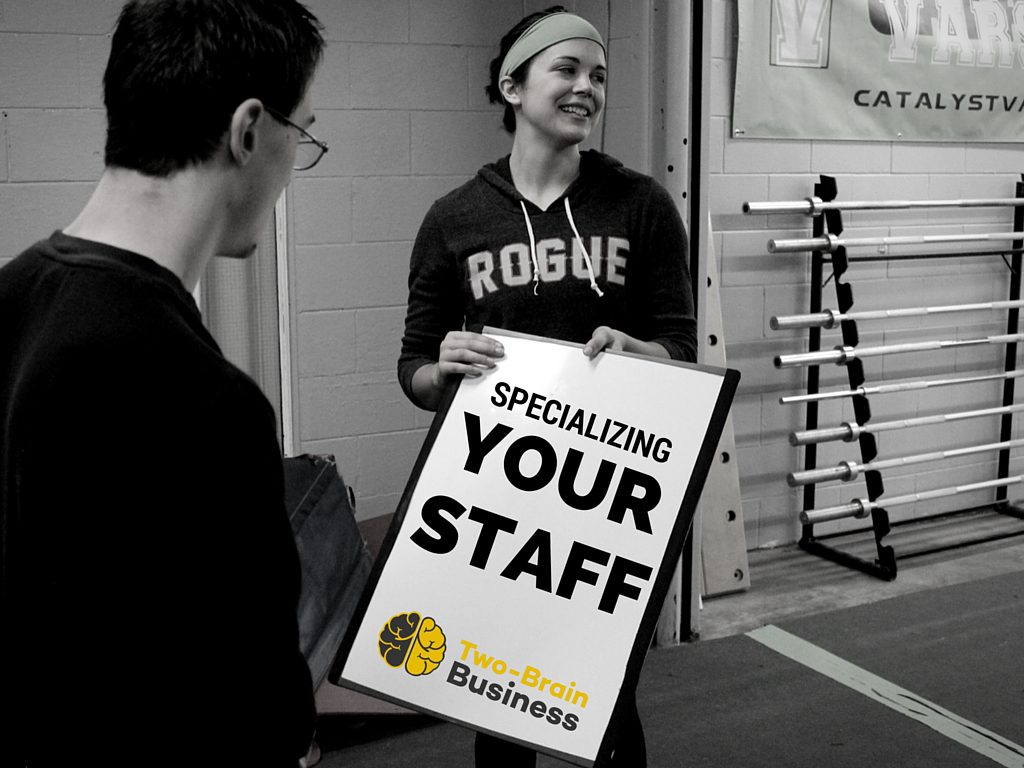 John Wooden’s players had higher shot percentages than anyone else.

Did he recruit the most accurate shooters? Did he create secret drills, or teach a different hand position on the ball?

As told in John Maxwell’s book, “The 5 Levels of Leadership,” Wooden took a different approach: he watched his players shoot, and noticed where they shot best. Then he stood the player in that spot, and told them “This is your spot. Shoot from here. I’ll design plays to put you in this spot.”

True leadership isn’t about making everyone pretty good at everything. A good leader will identify where people can succeed most often, and put them in that position whenever possible.

In your gym, you wear many different hats (probably 12 to 14, if we broke them all down separately. I suggest you do just that.) If we gave a name to each, these might be some of them:

Michael Gerber’s book, “The E-Myth,” will help you identify roles and assign tasks to each.

From there, a good leader will identify the BEST person for each position.

It’s not enough to be good at math; the Account Manager has to be able to break bad news to people.

For example, I’m not the best person for the Account Manager role in my business. I’m good at math, and enjoy sorting data, but I don’t want to relearn how to use MindBody every time they roll out an update. I don’t want to have to deal with members who owe money. So I don’t: my GM is better at it than I am.

Likewise, the CSM role is off my plate (click here to get a sample staff contract.) Everyone who holds the CSM position at my gym is BETTER at it than I would be. When our CSM calls, people answer. Our CSM smiles on the phone. People post about the CSM’s phone calls on social media and they blush when the CSM says “I’m proud of you.”

Do I know how to dial a phone? Of course I do. Do I have time to make the calls? Sure–but I won’t. Neither do my other coaches or staff, who are busy with THEIR specialty. Some of my other coaches would definitely NOT be great at calling people and saying, “I’m proud of you. What are you going to accomplish next?”

After you’ve broken down all Roles and Tasks in your business, choose the “lower value roles” (I teach you how to do this step-by-step in the RampUp course). Get those roles off your plate, and spend more time in “higher value roles.”

Gerber calls this “working on your business instead of working in your business,” but for a gym owner, this means “Do the stuff you like.” Want to coach and nothing else? You can do it. Want to be an athlete and have the gym run itself? You can do that, too.

Then write a short-term contract for the specific role. Evaluate the outcome after three months (click here to get a free staff evaluation template.) Continue the contract or move the role to someone better.

One final note: placing staff in roles where they WON’T succeed is bad for morale, retention and job completion. Expecting all coaches to “share” cleaning duties or client retention or programming will hurt morale, cut productivity and downgrade results.

Put people in position to take their best shot.