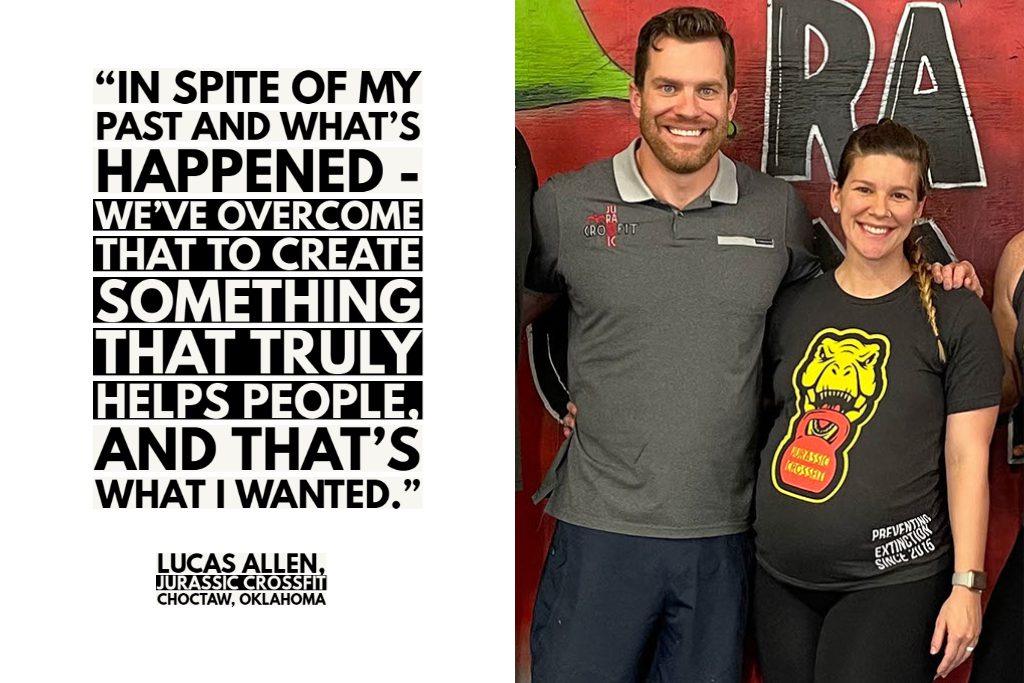 Back in 2011, a night of poor judgment resulted in a three-year stint in military prison for Lucas Allen.

“I messed around with an enlisted member as a maintenance officer at my apartment. I was 22, she was 19. I didn’t know she worked for me, but that doesn’t excuse what happened,” Lucas said.

He was put in solitary confinement for the first few months.

“You get an hour of sunlight. You never leave a 4-foot-by-8-foot area. It was pretty depressing. My weight ballooned.”

Despite that, incarceration was also an opportunity for growth: “You get a lot of reflection time.”

A fellow inmate introduced Lucas to CrossFit, and things improved.

“I started getting healthier. I lost almost 100 pounds,” Lucas said.

As a felon, he knew he would have trouble getting a job when he was released. So he started training people as a side hustle.

“There weren’t a lot of options. I couldn’t even work at McDonald’s,” he said.

Lucas continued: “I was a welder, so I welded up a rig. I didn’t have much money—in the back of a garage, just do what you can. It was nitty-gritty CrossFit.”

When he saved $30,000, Lucas set out to open a gym. But his business partner backed out when it was time to sign the lease.

“It was a blessing, though, because having to do it on my own meant I was the sole decision maker.”

Within a couple of years, membership exploded at Jurassic CrossFit. But when Lucas departed for his honeymoon, a few of his coaches left for a cheaper gym 2 miles down the road—taking 20 members with them.

“At that time I was a full-time coach. I was reaching the point where I didn’t know where the gym was going. Clearly, we’re not doing something right if a bunch of people just left. Something’s gotta change or this gym isn’t going to make it.

Mentorship and a Mindset Switch

With the guidance of his mentor, Joleen Bingham, Lucas worked on sales, and he shifted his mindset to recognize the value of personal training for his clients.

“I’ve seen him step up and take responsibility for training his team and for recognizing when he had to make hard decisions,” Joleen explained. “He is much more confident in his ability to grow the gym—and with Affinity Marketing and gathering referrals, also.”

The personal improvement has resulted in measurable financial success.

He’s also improved his service and client journey to provide more value, which is reflected in his rates.

“We’re over twice what our membership was—and it’s $160 a month. No family discounts,” Lucas explained. “And people have to pay $350 to get started with my PT package to do on-ramp.”

After just a year with Two-Brain, Lucas has improved his home life, too: His wife was able to leave an unfulfilling job at a mortgage company to work at the gym full time.

“Now we’re at the point where we are building. And we’re having a baby daughter. I only have to coach three hours a week,” Lucas said. “And I have blocked out my schedule for two weeks of not even setting foot in the gym. … Having someone like Joleen walk me through these steps, it’s helped a lot. We’ve come so far we don’t even recognize where the gym’s at.”

It’s a far cry from being locked in a cell. Now, Lucas is able to help others accomplish their health and fitness goals, and he’s rebuilt his life.

“The gym is able to support both of us,” Lucas said. “And we’re worried about things like a new building, and who our general contractor is going to be, … instead of ‘how are we going to make ends meet?’ The life that we’ve got now—a house with a giant yard, an amazing wife and a baby coming—if you’d asked me six years ago, that’s not even in the realm of possibility. We’re in our Perfect Day.

“We’ve been super blessed to be on this journey, in spite of my past and what’s happened. We’ve overcome that to create something that truly helps people, and that’s what I wanted.”